Inspired by “Previously On…” recap sequences on TV shows, Backstori.es is a web-based tool that allows journalists to semi-automatically generate a background explainer video for any news story. In less than 5 minutes, users can generate a list of relevant previous stories (using the current story’s inline links and other structured data), select the headlines and images that matter most, arrange them in a sequence and customize transitions. Backstori.es then automatically creates a short, dynamic explainer video using the Stupeflix API.

Following the news is hard. The complicated storylines and expansive casts of characters that animate global economic, political, and military issues can be baffling if you’re not familiar with the ongoing story behind the latest episodes in the news. It’s almost like trying to jump into watching Game of Thrones mid-season.

But wait! There’s a fix for that!

Backstori.es is a “Previously On” for news.

“Explainer journalism” — in the form of conversational, Q&A-format articles, explainer videos, and even whole new news organizations — has been on the rise, helping news readers get up to speed on stories they haven’t been actively following.

Explainers can be great at providing in-depth, evergreen and search-optimized coverage of a story — but they generally cater to more active readers who want to dig into a story’s background. Those readers are likely to skip the hard news and go right for the explainer; many others click away to easier-to-digest news that doesn’t require so much background.

Backstori.es (GitHub) puts video explainers into the news itself, where they’re most useful.

While explainers are most valuable in breaking news situations, they are slow to produce and difficult to keep up-to-date. Producing them creates more work for journalists or additional costs for the news organizations. Videos, which are increasingly popular online, present additional challenges for many news reporters, who lack the time or technical skills to produce them.

Backstori.es helps journalists quickly produce videos that work like pre-roll sequences for any news article, engaging readers that might not have the time or interest to read through an in-depth explainer. By using the archive, Backstori.es also produces trustworthy content that captures value from a news organization’s previous work.

Here’s how it works, right now:

As we continue to develop this project, we’ll introduce more editing functionality to improve video quality without adding more work for editors. 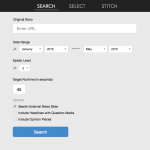 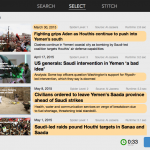 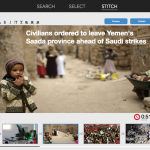 Here are a few Backstories we made:

3 thoughts on “Backstori.es: A “Previously On” For News”